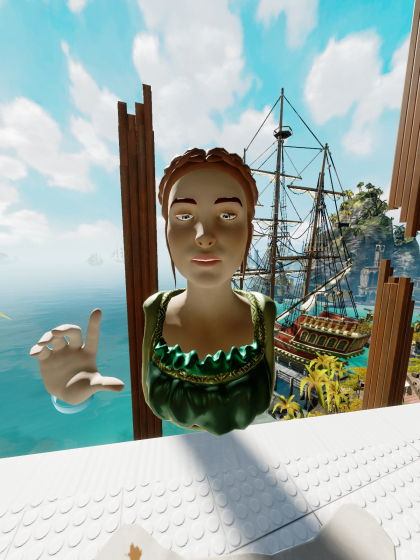 I've been using my Quest 2 daily with link cable to PC, and it was working fine. Today a new UI appeared in my Quest 2 (wider, new icons on the left of Explore), and when I attempted to link to pc, it stalled with black screen and 3 dots. It thought it was going to be able to connect (could tell the cable was plugged in) and let me push the Launch button, and when I disconnected the cable it correctly detected that and dropped me back to the quest menu. But it failed to connect to desktop even after waiting a while. I rebooted both pc and quest multiple times and it still failed. I don't see a pending software update to desktop oculus software. I was going to post a quest software version number here, but it's ridiculously long to try to type and there's no copy-paste from quest, so ehh; it says no later software updates are available, anyway. I already have a Meta account set up and have facebook integrated; although I originally had a legacy oculus account, I switched to the new account stuff some months ago, so I should be fully integrated to the new system there.

95% of my games are desktop vr, so I'd like to get this working again somehow.

That's definitely mysterious, but also pretty awesome! We're glad to hear that the issue was resolved! If it acts up again, feel free to let us know and we'll do everything we can to help out. Enjoy the upcoming weekend!

Hey there, @pathmakerjen! That definitely doesn't sound like something any of us would want to deal with, we'll do everything we can to help out! Does the Quest 2 work as a standalone device still? Could you also test to see if Air Link is working? We'll be looking forward to hearing back from you!

Mysteriously, the link cable is now working again, despite me not having done anything differently.

When I was seeing failure earlier, the Quest 2 still worked as standalone just fine. I didn't remember to test Air Link during the failure state. Air Link works fine now, as well as link cable working fine. I'm puzzled but it's okay now! I retested link cable and saw it work, and then tested airlink and saw it work. I don't think airlink did any kind of reset or anything, since I tested link cable first just now and that was just working.

That's definitely mysterious, but also pretty awesome! We're glad to hear that the issue was resolved! If it acts up again, feel free to let us know and we'll do everything we can to help out. Enjoy the upcoming weekend!