https://drive.google.com/open?id=0BxFsB_7ofjCAbXE5ODJpTXE5cWc I've been doing some legwork for the robot interviews in Osaka (thinking spring) In addition to working with a tutor to learn conversational Japanese, I took a day long shooting and stitching 360 video class at CUNY Journalism School and I took a 6 hour workshop on audio fundamentals.

I also met with my interactive designer Cyril Tsiboulski of Cloudred Studio in NYC who loved the project so much, he offered to learn Unity to do it. So, we are working together for a demo of scene 1 of the VR experience for August.

I have the initial workings of a game design document--Thanks Dale Henry  for posting that a while back!  I realized two things 1) this was always going to be a transmedia project. I simply can not tell the whole story in VR. So, I will house an interactive 2 d version of  Shizuku, the robot girl's memory banks on www. atomicvacation.com. I am meeting with a friend who does data visualization this week to see if there is a commercially viable option for this, will also investigate whether I could use Twine.

The online site will also house and archive of player "vacation photos" and #eotwawki poems from the VR experience (see game document) and a souvenir store which serves as an online archive of my own real atomic vacation memorabilia and documentation (I traveled to Japan for the 70th anniversary  of Hiroshima and through the American west to visit all American vacation destinations like the Grand Canyon as well as sites of nuclear warhead storage and testing) and as a store selling real atomic vacation tchotchkes like t-shirts and key chains.

The VR experience is really about language especially written language and how that defines "human" for us and our view of the world. This is, of course, what Turing used for the Imitation Game. Here is the design document (without detail):

Overview: Atomic Vacation is a narrative game for virtual reality

2.Interact with landscape to access story (narrative and database elements)

4. Complete language related tasks and  “puzzles” in each scene.

Narrative game with a game mechanics consisting of user exploration of a place and interaction with objects.

Game for Oculus Rift: you are locked in a room and must use various tools to find information and unlock different experiences e.g. hammer, number codes, screwdriver, color codes, etc.

Turing’s Imitation Game was never a test as to whether machines can think, it is a test to see what we humans think passes as human. Like Turing’s test, the puzzles in this game involve written language. How does one fail the test?  Oppenheimer says that there are acts which although they would not destroy the human race, they would make anyone who remains wonder whether there were anything “human left.”  This point will be made overtly in the first scene.

Atomic Vacation is a compelling, futuristic narrative game for VR. Through exploration and interaction with data objects, the visual representation of a robot girl’s memory banks, the user helps Shizuku, the last sentient survivor of a nuclear apocalypse on Earth, recall her memories of that place and her unusual relationship to the woman scientist charged with teaching her how to be “human.”

Atomic Vacation is an exploratory landscape narrative game for Oculus Rift that tells the story of Shizuku, a little Japanese robot girl, from a near post-apocalyptic future, the lone inhabitant of a rocket ship on a mission to find inhabitable planets. It offers a significant transmedia component: the online website www.atomicvacation.com that will contain an interactive data visualization of Shizuku’s memory banks, a user-generated archive, and a souvenir shop. Optimally, these will be displayed in an art installation that uses documentation and memorabilia from my own “atomic vacation” through Japan and the American West as well as a video of my interview with Hiroshi Ishiguro’s lifelike androids about various aspects related to how we conceive of someone being “human” (filming planned for early spring 2017).

Atomic Vacation takes its inspiration from Alan Turing’s “Imitation Game” which was not really about whether machines can think, but rather a test of what humans conceive of as “passing” as human. Like the Imitation Game, Atomic Vacation uses written language, in the form of language games, to offer player’s a kind of Turing Test. Atomic Vacation uses both narrative content and game mechanics to challenge players to think about what it means to be human in an increasingly computer mediated and virtual world, and to consider the role of language in limiting or expanding our view and in making sense of things.

What sets this project apart?

Profound and compelling ideas presented in an accessible game setting

1. Exploration *** part of all environments

User movement is free, but confined to a domestic interior in Scene 1. In scene 2, it is not constricted, but it is endless, directionless darkness, until one illuminates words, which both creates orientation and a lit passage to the next environment. Scene 3 allows the user to walk down a seemingly endless desert highway shooting things. Scene 4 allows slow movement through a semiabstract decimated landscape or one can move faster in a bird’s eye view but, less detail is seen.  Scene 5: movement restricted—on a platform in deep space surrounded by vintage postcards of Earth.   >

2. Take a photo ***part of all environments

In each environment, the user is encouraged to take souvenir snapshots. These can be used for orienting the user in the landscape (with the help of the online mind-map) or can be sent to friends and will be archived online with the mind map at atomicvacation.com. In scene 4, the user will see poetry scrolling across the sky with clouds both moving supernaturally fast. The only way to read these words (computer-human hybrid poetry) is by taking a picture.

4. Interaction with Data Objects: Scene 1 and 5

In scene 1, the user’s primary interaction with the environment is through game objects which the user brings closer, “opens” and accesses via sustained gaze on a target.

In scene 5, the user uses gaze to open up banal Youtube videos of “the real” places e.g. Rehoboth beach.

In Scene 2: The user is in the dark, unable to move. Her gaze is like a flashlight, it can illuminate words in the dark. By keeping her gaze a word for a few seconds, she causes it to be illuminated. Using the light from these words or from her flashlight, she can make her way through the maze created by the words to reach the center where the final word “rainbow and teardrop” can be found and collected.  A voiceover reads Turing’s Imitation Game paper while the user plays.

In Scene 3: the user operates a flame thrower to evaporate rotating cubes printed with major categories of human thought like “Science” and “Sex”. Smoke floats up bringing with it spoken words of poetry related in some way to the topic.

7. Collect fragments of poetry and make a poem :Scene 4

Users collect five fragments of computer-human poetry in a bleak, post apocalyptic black, white and gray landscape. The user will be asked to take a snap and share it.

If the player collects at least 3 of the teardrops, after the last environment, the postcards will crumble, she will be floating in space above the world and can sprinkle her rainbow teardrops on the Earth. This causes a beautiful animation to begin. 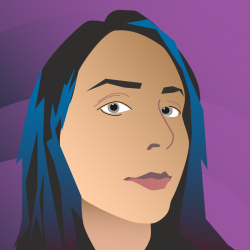 I love the imagery in your scene/level descriptions! This could totally work as an interactive art installation, as well.
1 Kudo
Share
Reply

I find it hard to call it a hidden object game, but your scene #1 really made me think about it that way. I am struggling a little on dealing with finding a way to "uncover" items in a more profound way in the mystery I am working on. If you want to play it, you can always check out that thread. Maybe some ideas you have swirling around can help make that experience better. I'm specifically interested in how data and narrative can unfold as I feel I have information presented to the player, but not in a way that paces them to uncovering the secret just yet.

I find it hard to call it a hidden object game, but your scene #1 really made me think about it that way. I am struggling a little on dealing with finding a way to "uncover" items in a more profound way in the mystery I am working on. If you want to play it, you can always check out that thread. Maybe some ideas you have swirling around can help make that experience better. I'm specifically interested in how data and narrative can unfold as I feel I have information presented to the player, but not in a way that paces them to uncovering the secret just yet.
So much good stuff here though!!!

Thanks for your comments.I really appreciate the time and effort to provide feedback. I will check out the thread. I spent a couple of hours playing Don't touch anything on oculus with friends. We had a blast, but it is a tough puzzle game, and whatever narrative there is (not much) is lost by the difficult mechanics of the puzzle. So, this is something to think about. I was just talking to a friend of mine who does data viz and VR and we were discussing sound as guidance which is something I am going to think about. The rhythms of discovery are so critical whether sound is the primary guiding force or not. What I have going for me is beautiful writing which is absent from most games. I want to use this to full effect...

Erica--I have a plan for an installation. I have collected so much documentation on vacation and so much cool weird memorabilia.
0 Kudos
Share
Reply